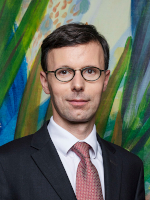 Jean-Baptiste began his practice in 2001 in a large IP law firm in Paris. He joined CASALONGA & ASSOCIÉS in 2008 and became a partner in 2012.

Jean-Baptiste is in charge of patent prosecution, and has acquired an extensive experience in opposition and appeal proceedings before the EPO. He is also involved in legal opinions (validity of patents, freedom to operate, license agreements) and patent litigation cases.

Jean-Baptiste is member of the European Patent Institute (epi) and the International Association for the Protection of Industrial Property (AIPPI).