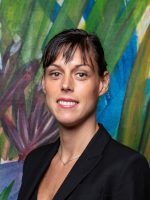 Reactive and efficient, Patricia has been practicing for more than 13 years in the field of intellectual property and has acquired a particularly recognized expertise in the field of mechanics. Our clients trust her completely for the protection and defense of their rights, and particularly appreciate her rigorous drafting of patent applications and her knowing of oral proceedings before the EPO.

She also gives opinions on freedom to operate cases, studies the validity of claims of some patents, and actively participates with attorneys-at-law in litigations for infringement.

She specializes in a variety of technical disciplines such as mechanical engineering, mechanical design, materials, thermodynamics.

Patricia began her career with CASALONGA in 2009.

Based in Pau since 2014, she contributed to the creation of our local office in this city, where she ensures the development, in liaison with the Paris team.