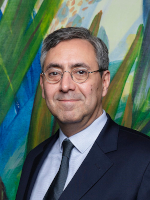 Olivier Delprat has practiced Industrial Property Law since 1994. After several years of experience in a large law firm, he joined CASALONGA & ASSOCIÉS in 2001 of which he became a partner in 2006.

Olivier is in charge of procedures for granting patents in France, in Europe and other countries as well as opposition and appel proceedings at the European Patent Office (EPO) for French and international companies.

His long experience in law firms allowed him to acquire a recognized expertise in litigation and court litigation. He collaborates closely with CASALONGA’s attorneys in many patent litigations both in the French and European courts and abroad, in various fields of mechanics and electronics. He frequently organizes infringement-seizure operations to obtain evidence of patent infringement, in negotiations for the resolution of disputes and in mediation.

His activities also cover the field of contracts, the valuation of Industrial Property assets and the audit of patent portfolios.

He is a regular speaker at conferences on industrial property.

Arnaud Casalonga takes part in a round table discussion on intellectual property on Wednesday, December 15, as part of the information mission on "French and European policy(...)
Learn more