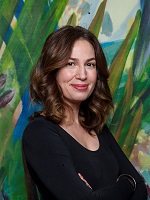 Floriane began her carrier as a lawyer in a French law firm specialized in Criminal Law, pleading before many jurisdictions, including the Supreme Criminal Court.

In 2007, she joined GREFFE Avocats, a French law firm specialized in IP.

In 2009 she joined CASALONGA AVOCATS.

Her practice includes counseling and litigation in all areas of IP Law (patent, trademarks, design, copyright, unfair competition, advertising as well as Internet).