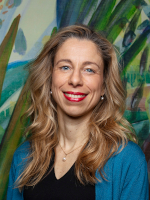 Virginie Martin-Charbonneau began her career in 1997 in the Industrial Property Department of the TOTAL Group (refining branch). She served three years in a research center and then five years in the central office, as IP Manager in charge of catalytic and refining processes and petroleum products (fuels and solvents).

During these eight years in industry, Virginie acquired extensive knowledge of the IP issues and strategies of a large industrial group.

Virginie advises and supports many French and foreign clients in the field of chemistry including cosmetics, dermatology, pharmaceuticals, industrial chemistry, petrochemical and chemical engineering.

She assists and represents clients in protecting their inventions worldwide, advises in the development of their IP strategies (technical and legal opinions, freedom to operate opinions, developing offensive or defensive strategies and drafting IP agreements). She advises clients in patent litigation before the French courts and handles oppositions procedures before the European Patent Office.

Virginie has acquired extensive experience in proceedings before the European Patent Office, and regularly represents clients in oral proceedings in opposition and appeal.

Since 2007, Virginie Martin-Charbonneau is a teacher at the International Section of CEIPI (University of Strasbourg), and is involved in the training of future European patent attorneys.

She is a member of the French Patent and Trademark association (CNCPI “Compagnie Nationale des Conseils en Propriété Industrielle”) of which she was member of the Board from 2011 to 2012, the European Patent Institute (epi), and the Licensing Executive Society (LES).

Arnaud Casalonga takes part in a round table discussion on intellectual property on Wednesday, December 15, as part of the information mission on "French and European policy(...)
Learn more