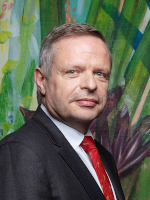 Francis began his career in 1984 as a research and development engineer in the aerospace industry, particularly in an R&D department specialized in the field of software for gyrolaser inertial navigation systems as well as in the field of aircraft automatic control systems such as for the Airbus A320 aircraft.

In 1987 he specialized in Industrial Property Law and joined CASALONGA & ASSOCIÉS in 1991. He has been a partner since 2003.

He deals with patent prosecution in France and in Europe and all over the world, as well as opposition and appeal proceedings at the European Patent Office (EPO) in particular in the fields of electronics, microelectronics, software-related inventions and new technologies (NTIC).

Francis is involved in patent litigation in France and abroad, where he joins a team of patent lawyers of CASALONGA AVOCATS. He regularly organizes and practices infringement seizure operations to find evidence of patent infringement.

Francis was tutor in the preparation course for the European Qualification Examination within the frame of the epi/CEIPI special courses in Strasbourg.