A Unitary patent has been created by a specific EU Regulation which will enter into force together with the Agreement on the Unified Patent Court.

What is a Unitary Patent ?

The Unitary patent is in fact a European patent having a unitary effect in most of the EU Member States.

How to obtain a Unitary Patent ?

To obtain a Unitary patent, it will be sufficient to file a European patent application.

Within one month from grant of the patent, the patentee will have the possibility of choosing between :

What does the Unitary patent covers ?

What translation is required ?

A translation is to be filed of the complete patent (description and claims) in the language of any of the UPC Contracting Member States as long as the patent has been granted in English. For example, the patentee may file a translation in French or in German. (See the specific Regulation on translations).

Is it possible to file an opposition against a Unitary Patent ?

What annual fees must be paid for a Unitary Patent ?

How can a Unitary Patent be assigned or licensed ?

The Unitary patent can only be assigned for the entire territory covered. Licenses limited to certain territories may however be granted.

What to do in case of infringement of a Unitary Patent ?

The infringing acts of a Unitary patent are defined in the Agreement on the Unified Patent Court (UPC Agreement). This new Court will have exclusive jurisdiction for all infringement actions relating to a Unitary Patent as well as for determination of damages and revocation actions.

For more information from the Preparatory Committee of the Unified Patent Court, click here.

Which patent protection should be chosen in Europe ?

There are a number of possible choices, from national patents to European patents with national effects and the Unitary patent.

The decision will depend on each situation. The following points may be taken into consideration :

It must be noted that this risk should be balanced with the advantages of the new centralized patent court system (one single decision on infringement, injunction and damages for a group of countries).

An app on iPhone, Androïd and web browsers conceived by CASALONGA allows you already now to simulate and compare annual fees for a European patent, with and without a Unitary Patent. 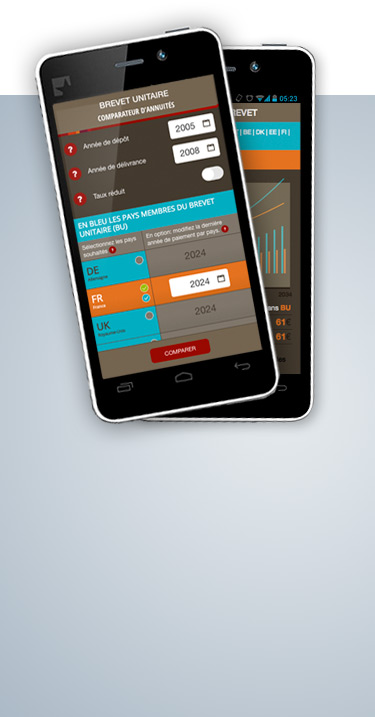